Varnish buildup in oil systems is a big concern for Chevron’s industrial lubricant customers. In previous articles on this topic, we looked at the causes of varnish and the type of damage it can do. Then we explored the pros and cons of various varnish removal solutions. What we have observed is that, while some of the cleaners in the market are effective in certain circumstances, they also present a number of issues. Years ago, Chevron set out to develop a solution that addressed the issues of greatest concern, namely:

Moreover, residual dispersal/detergent cleaner left in the oil system when the oil is changed can destroy the new oil that is installed. Ensuring that the cleaner is completely removed from the system requires a full flush, which can cost as much as $100,000 depending on the size of the system.

In response to these issues, we have introduced Chevron VARTECH™ Industrial System Cleaner (ISC), a non-solvent-based product that can be added directly to oil during operation to clean varnish and sludge from the system before a scheduled oil change. In exhaustive lab testing against existing products, Chevron VARTECH™ ISC exhibited excellent seal compatibility, water/oil separability and oxidation performance. Before we put it in our customers’ critical systems, we knew we had to test it in a real application.


Putting it Through Real-life Application Test

For that we chose a Chevron offshore production platform with three turbines on board. The rig processes some 100,000 barrels of oil a day, and needs those turbines to be running, so if our test was unsuccessful, it would be extremely costly. Failure was not an option. It so happened that two years prior, we had tested a popular commercial dispersant/detergent product on one of these same turbines, so we could do a back-to-back performance comparison.

The turbine had a severe varnish issue. The oil cooler had been fouled, meaning the temperature would eventually rise to the point where the operators would have to shut the turbine down to replace the cooler. We added Chevron VARTECH ISC and, over 45 minutes, the main oil header temperature dropped around 20 degrees, from too high to normal. That told us right away that the product had successfully cleaned the varnish from the oil cooler. With the previous dispersant/ detergent product, it took two days to start seeing a temperature drop. That product was also plugging the filters in the system every few minutes with varnish debris. Chevron VARTECH ISC had no such filter plugging effect over the two-day test period.

Subsequent testing in actual equipment over longer durations continued to validate the initial findings. VARTECH ISC outperforms other commonly used cleaners in cleaning efficiency, effectiveness and system compatibility without affecting water separability and oxidation stability. What’s more, this excellent compatibility greatly reduces performance impact for the new oil when flushing is impractical, and it does not need to be used in conjunction with a varnish filtration system. As a general rule, we do not recommend leaving any varnish cleaner in a system indefinitely. Just add Chevron VARTECH ISC prior to a scheduled oil change, and the varnish debris will come out with the old oil. 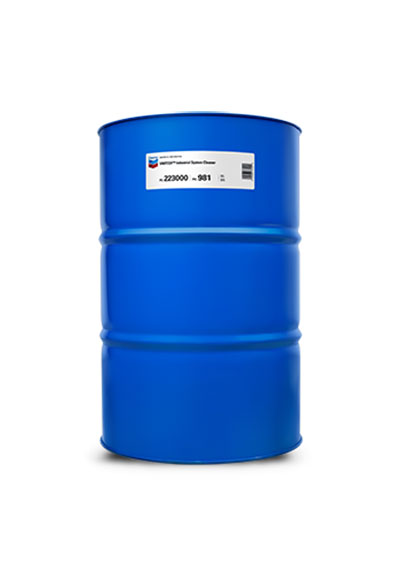