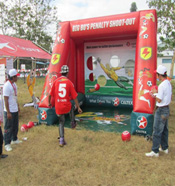 Clark, Pampanga, Philippines, February 13, 2011 – Whisked away on a bus from the crowded confines of Pandacan to the vast expanses of Clark Freeport, the trip took only two hours, but to the kids of ERDA Tech who come from poor families, the difference in surroundings may have well been a voyage to another planet.

All 40 high schoolers, ages 13-17, aside from seeing hot air balloons for the first time during 16th Philippine International Hot Air Balloon Fiesta, also got to kick their first soccer ball into a goal. Even for just a day, the kids felt like one of the heroes from Supa Strikas, a popular soccer comics and animation series.

Caltex, one of the leading energy brands in Asia and marketed by Chevron Philippines Inc. (CPI), hosted the students from ERDA (Educational Research and Development Assistance)Tech to help the kids see new things aside from their familiar surroundings in Pandacan. ERDA Tech helps disadvantaged children stay in school and equip them with technical knowledge and skills that would enable them to pull themselves out of poverty.

One of the students was 2nd year high schooler Joselito Marlon Baisa, 17, who was abandoned as a child. Marlon likes Supa Strikas because he identifies with one of the main characters, Shakes.

In the series, Shakes, a poor kid, learns many valuable lessons along his journey to sports stardom.  The stories have positive life messages that deal with self actualization, fair play, teamwork and respect, consistent with the values of Caltex. Shakes often finds himself spearheading the team’s exploration of the unknown, a trait Marlon shares.  In school, his favorite subject is Science because he likes to explore.

Marlon says, “This trip helped me motivate myself to reach for my dreams, especially since I aspire to be a pilot someday. When I saw the hot air balloons and the airplanes, I felt as if I were already flying in the clouds while looking down the beautiful and vast scenery below.”

Grenville, says that the Caltex-sponsored cartoon show, Supa Strikas, is about building dreams and reaching goals which can be related to the situation of the kids in Pandacan. “It is very important that the children be exposed to the environment, let them play and have fun because these memories will serve as an inspiration for them to do better in school and in life.”

Just the very thing that Marlon intends to do. Though Marlon sometimes feels sad about not having a biological family, he remains thankful he survived and for having a new family that treats him as true son.

Marc Magsalin, asst. principal of ERDA Tech said, “Meeting the Strikas creators and watching hot air balloons is a privilege our students would never have given their current circumstances. We appreciate what Caltex has done – they opened our children’s eyes not just to the wonders they experienced but also to realize that there are bigger and better things waiting for them in life through education. Like the values promoted by Caltex, Supa Strikas have inspired these kids to work hard, believe in themselves, and pursue great things.”