Proper application of grease is an underappreciated but essential part of industrial maintenance, in both mobile off-road and stationary plant equipment. There is a much wider variety of greases used in industrial applications compared to on-highway vehicles, simply because of the sheer number of components and different machinery. It’s important to know not only the right grease for each application, but also the right amount to apply and the optimal re-greasing method in each case.

Off-highway mobile equipment, such as bulldozers, backhoes or excavators have a lot of pins and bushings. These generally involve a journal bearing in a plain rotating shaft (as opposed to a rolling element or ball bearing). The standard practice for re-greasing is to pump in the fresh grease, which forces out the old grease, until the fresh grease comes out of the bushing. This method purges any contamination from the journal while ensuring that all the old grease comes out. It’s a fairly straightforward procedure requiring no measurement or calculation – just be careful not to spill too much grease on the shop floor!

Rolling element bearings are a different matter. In addition to the bearings themselves, they often include a shield or seal. This prevents or at least minimizes contamination, and also allows you to keep the grease in for longer intervals. However, it also limits how much grease can be applied with each re-greasing. Here, the method of pumping in new grease and flowing out the old grease until the new grease appears does not work. In fact, that is likely to damage the seals or shields, resulting in more contamination, more frequent re-greasing, and ultimately having to change out the bearing more often.

In this case, you have to be more mindful of the amount of grease going into the bearing, generally filling about a third of the cavity. As a general rule of thumb, if you multiply the bearing width by the bearing diameter in inches, and take one-tenth of that sum, it should equal the number of fluid ounces for re-greasing the bearing. Make a note in your maintenance practices of how much grease to put into each specific bearing. Then calibrate every grease gun in use to determine how much grease is dispensed in one pump. This can be done using a postal scale. Cover the scale to keep it clean, then pump the grease five times onto the scale. Divide the total weight by five to get an average weight of one pump and note this on the grease gun. This number can be used to accurately re-grease bearings.

Over-greasing is one of the biggest problems, particularly in electric motor bearings where it can damage the seals or shields and cause early bearing failure, or even destroy the electric motor.

Customers sometimes ask how often they need to re-grease a particular application. It depends on a number of variables, including the speed of the bearing, how much it is being used, and the temperature of the housing. The higher the temperature, the more frequent the greasing – sometimes daily, if the temperature of the housing exceeds 93oC (200oF).  Contamination is another factor. If the unit is subject to particulates or moisture, it will require more frequent re-greasing to protect the rolling elements. The same is true if the bearing experiences a high level of vibration. And the final point is the position of the shaft – a shaft mounted vertically will need as much as three times the re-greasing frequency as one that is mounted horizontally.

While the automotive industry has pretty much standardized down to a few grease choices, things get a little more complicated in the industrial environment. It pays to understand the differences among grease types and how to apply them properly in order to get the optimal performance and longer life from your equipment. 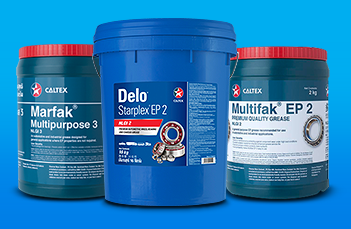 Using the right grease helps protect your heavy machinery from extreme temperatures, pressures, and impact, extending reliability and service life and saving you money in the long run.